The organizing principle used throughout Teaching Crowds is based around our typology of social forms. These are essentially ways of classifying communities. We have tried to avoid using the word ‘community’ as anything more than a fuzzy way of describing any arbitrary collection of people, because it has been over-used and over-defined in far too many different and often conflicting ways in the past.

Like many others, we recognize a distinction between purposive, organized groups (designed entities that tend to have names, lists of members, rules, norms and rites of entry and exclusion, sometimes rather misleadingly described as ‘teams’) and individual-focused social networks (the people someone knows, whether through strong or weak social ties). In addition to that, we introduce the concept of the set, which resembles what some people describe as networks of interest, or social interest networks. But these are not networks, inasmuch as there is no requirement or expectation that we will know any of their members. Sets are defined simply as people sharing a common virtual or physical space who have shared common attributes. In most learning contexts the main attribute that concerns us is having shared interests, but it can equally mean other shared features like gender, religion, ability or values, or even simply the fact that they share the same space.

These social forms are like primary colours that can be mixed and blended in an infinite variety of ways – they are not exclusive categories at all. For example, communities of practice tend to share some characteristics with groups but are, in other ways, more like nets. Similarly, tribal forms like universities have plenty of group-like characteristics but are in some ways set-like.

Beyond the social forms, we describe an entity that we call the collective: this is simply a manifestation of collective ‘intelligence’, though we parenthesize this because it can just as easily be collective stupidity or ignorance. In choosing the name we also wish to somewhat distance ourselves from the broader field of collective intelligence that can relate to things like ways that groups spread knowledge among their members, along with structures and processes that encourage such knowledge dissemination. The meaning we have chosen to stick with is closer to that of Star Trek’s Borg or a hive mind than to one relating to social structures and methods: this is not so much to do with the general field of crowd wisdom as with a very specific mechanism that may drive such wisdom:

Collectives are formed from the aggregated and processed actions and interactions of a crowd (set and/or net and/or group) that are combined algorithmically by individuals or machines (or both) in order to act as a single individual entity.

What is most interesting about this entity, or agent, in the context of our book is that it can take on some of the important roles of a teacher, including roles such as sorting, organizing, filtering, discovering, evaluating and recommending things to learn. When you know what to look for, collectives may be found everywhere on the social web, from tag clouds to recommender systems, Google Search to Wikipedia, eBay to Stack Exchange.

This diagram shows some examples of each form and of the kinds of social aggregations that lie on intersections between different forms:

We were not entirely sure where to put the collective on this diagram and we are not totally happy with it where it is but nor can we think of a suitable alternative place to put it (the middle would work pretty much as well). The point we are trying to make is that it is not a social form in itself but it can emerge from any or all of them.

This diagram shows some of the distinctive features of each of the social forms which, together as a cluster, help us to identify what social forms or blend of social forms we may be looking at:

These features form a continuum, with no absolute boundaries marking one form from another. However, some are quite distinctive to a given form: roles, chains of authority and intentional design, for example, normally indicate the form is a group. Anonymity, shared interests and cooperative sharing often indicate a set. Permeability, social interdependence and individual connection tend to typify a net. But it is important to remember that we almost always see some kind of blending: for example, sets and nets are almost always found in groups and, indeed, a group may be viewed as either a set (membership being the shared characteristic) or a net (everyone is connected via group membership, at least).

This diagram shows how a generic collective works:

Note that the capture, processing and feedback elements of this can equally be played by machines and/or people. A couple of examples may help to illustrate this more clearly:

For a fuller discussion of the social forms and collectives, see chapters 3-7 in particular, in which we first describe the typology then explore the learning implications and examples of each in turn. 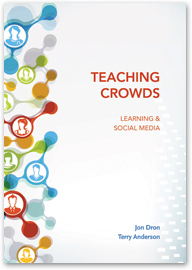